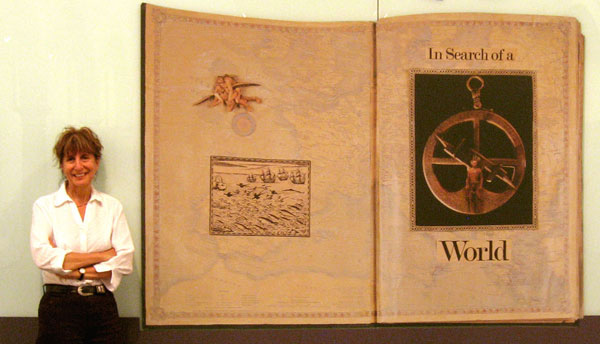 For the past 40 years, Terry Braunstein’s world of montage has been a discovery of deep truths hidden behind layers of seemingly disparate images—both ancient and modern. Braunstein is a philosopher as well as an artist — her creative weave of archetypes and ancient myths coupled with modern images found in the contemporary magazine sitting on our living room coffee table, gives us profound insight. The juxtaposition is often surprising and even humorous, reflecting how our own private, mundane world is actually connected to all of humanity, and how our life passages and experiences reflect universal themes.

Terry Braunstein has not only created art that connects diverse concepts and images, but it has evolved and expressed itself through incredibly diverse media. Where most artists work with perhaps one, two or even three media, her work has evolved through photography, painting, mosaic, printmaking, stone, steel, brass, and even video. She has been creating books (both published as well as sculpted), installations in museums and on the street — photographs, sculpture, and large permanent public art.

Terry Braunstein has exhibited her work in museums and galleries nationally and internationally, including the Centre Pompidou in Paris, the Gallery Miyazaki in Japan the Los Angeles County Museum of Art, and the Sala Arcs gallery in Barcelona, Spain.  She had one person shows at the Craig Krull Gallery in Santa Monica in 1992, 1994, 1997 and 2009, and at the Long Beach Museum of Art in 1992 and 2015-16; the Fendrick Gallery and Washington Project for the Arts in Washington D.C.; Marcuse Pfeifer Gallery and Franklin Furnace in New York, and many others around the world.

Braunstein was invited to Andalucia, Spain as part of “Imagina”—a series of one-person exhibitions of photographers from around the world–and commissioned to create a photographic response to this area of Spain for the Universal Exposition in Seville in 1992.

Her work is in numerous public and private collections, including the Getty Center for the Arts and Humanities, the National Museum of American Art, the Corcoran Gallery of Art, the Library of Congress, Victoria & Albert Museum in London, Los Angeles County Museum of Art, Bibliothèque Nationale in Paris, Museum of Contemporary Art in Chicago, the Long Beach Museum of Art, and the Museum of Modern Art in N.Y.

In 1985, Braunstein was awarded a Visual Artist Fellowship by the National Endowment for the Arts. In 2018, Braunstein was awarded a COLA (City of Los Angeles) Master Arts Fellowship. In 1999, and again in 2012, she was awarded fellowships by the City of Long Beach.  She was the recipient of an Open Channels video grant from the Long Beach Museum of Art in 1992, and was the recipient of the National Book Award of the Library Fellows of the National Museum of Women in the Arts for 1994.  She was invited to artist’s residencies at Yaddo in 1997, 1999, 2003, and 2005.

As Braunstein became increasingly interested in expanding the audience for her work, she turned toward public art.  In 1992, she was awarded a commission to produce public art for a Los Angeles Metro-Rail Blue Line station and in 1998, she was commissioned to create two photo-installations for the Los Angeles County Museum of Art’s “Windows on Wilshire” series, curated by Howard Fox.  In September 1999, Braunstein was awarded a commission to create a memorial to the Navy presence in Long Beach; porcelain panels for the elevators of L.B. City Hall; and a 50th Anniversary sculpture for the City of Cerritos.  In 2007 she completed mosaics and colored windows for the Sun Valley Health Center through the LA County Arts Commission, and in 2010 completed projects for the L.B. Transit at 6 different bus stations, art enhancements for the Rosie the Riveter Park, and a North Long Beach Entryway mosaic for the Redevelopment Agency of Long Beach.  In 2013, she collaborated with choreographer Cyrus Parker-Jeannette and animator David Familian to create an installation-sculpture for a dance performance that was part of an NEA-funded project to bring art to underserved communities.

Terry Braunstein was born in Washington, D.C. and received her BFA from the University of Michigan and her MFA from the Maryland Institute of Art.  She taught as professor at the Corcoran School of Art for 15 years.

“She Collage” by Kate Lain produced for the exhibition “Who is She? Terry Braunstein” commissioned by the Long Beach Museum of Art.

“Though her art uses the techniques of collage and the aesthetics of photography, Braunstein considers herself neither a collagist nor a photographer. But while Braunstein always uses found images, never using the camera to create images, her art is in fact more closely related to photography than to collage, particularly to aspects of darkroom photography in her manipulating, clarifying, extracting, combining, and reproducing existing images. Her sole use of the camera is mechanical, to reproduce her collaged images so that in their final material form her words may appear to be authentic photo documentation rather than pieced paper constructions. She exploits the appearance of photography to deny the fact of her paper collages and in order to simulate documentary “reality.” Braunstein thus uses the camera for one of its oldest and original purposes: to fictionalize, much as such pioneering photographers as Oscar G Rejlander (1813-1875), Henry Peach Robinson (1830-1901 or the cinematographer Georges Méliès (1861-1938) created images that never existed except in their art.”

“In addition to the photo collages or montages, Braunstein also creates books. The books have a far more hand-wrought quality, and are put into the world more as objects — as things — than as images of other things. But there are close similarities of concept and techniques with the photographs. As always, Braunstein utilizes existing sources — other books — to create her own books. She combines images extracted from her usual sources of magazines, books and printed matter, with illustrations or text pages from bound volumes such as children’s storybooks or scientific manuals. Some of her books “read” like normal books — that is, from one page to the next, in a sequence from first to last, and often there is a visual, if not always logical, narrative. But other of her books are sculptural with holes, windows and other contours cut through the pages, so that in turning from page to page, new information accumulates layer upon layer; these books are read not only from one page to another, but from one page through another. In the hands of the reader, one of Braunstein’s sculptural books becomes a kinetic sculpture whose visual and intelligible content changes with each turn of the page.”

“The magic of Terry’s work is that she has given new meaning and unexpected context to a common symbol we all recognize. The combination of the grand scale and the intimate, often nostalgic images act to draw visitors to the site and invite interaction. Rarely, in public art projects, is the resolution of formal issues so beautifully married with the subject matter, which, for so many, is the heart of the memorial. Happily, Terry’s sculpture is an object of extraordinary beauty that succeeds on all levels and for all ages.”

“There are as many definitions of “art” as there are expressions of it. If art is defined as a visual philosophy of life or a search for meaning, Terry Braunstein creates it. Whether expressed as a poignant view of human behavior, a nostalgic perception of things past, an honest look at life and loss, the wisdom learned from collective experience, desperate longing for love and desire, or anxious hope for the future, Braunstein’s art explores it all. Working in a variety of media that includes . . . . installations. . . she creates work that stimulates the mind and the heart on myriad levels.
Each visual narration (of her installations) can be interpreted as a poetic metaphor or a haunting allegory. A middle-aged man with one foot in a trashcan stares at a globe placed beyond his reach. An older woman slumps in a child’s wagon as red balloons float past her window. Two melancholy widows dance together as birds fly out of a gilded cage.”

“To create a picture in the way that Terry Braunstein does is, in essence, to reassemble pieces of our familiar world into a surprising, yet convincing, new world. . . . There are no ready answers to the questions Braunstein poses, and no promise of a resolution forthcoming. In fact, there seem only to be more questions, and more cross-references. By importing the loaded content of mass media imagery into her artistic landscape, she not only challenges the assumptions implicit in contemporary culture but also addresses one of the basic aesthetic dilemmas: the interpretive gap between appearance and truth.”